I think she is trying to pull a fast one. I know my ball is getting a bit past it… but, as she ought to realise all too well herself, being old and tatty doesn’t stop you being loved.

I mean, it isn’t even Christmas yet, so if she is trying sneaky stuff now, I have to worry what else she has in mind…

I remember her telling me that when he was getting a bit old for trailing a blue blanket around with him (even though it had gone grey by then), my boy was persuaded to leave the blanket out for the Easter Bunny… who turned it into a budgerigar called Magic…

Don’t go getting any ideas between you…

Mind, if you fancy dropping a special gift in to my friend in New England, that qwuld be cool… 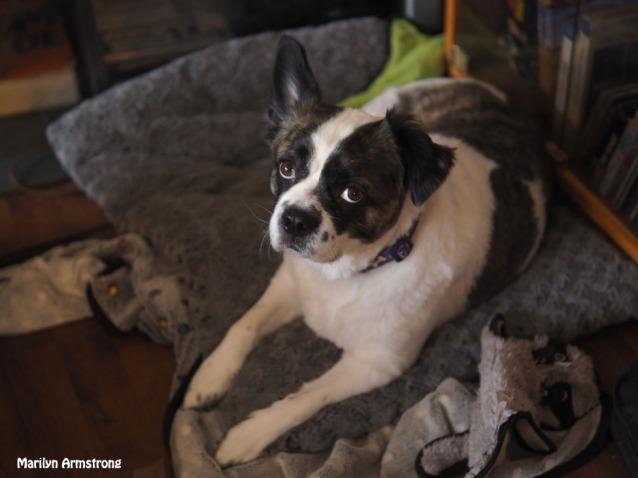 It must be Kissmas because there are twinkly lights on the window. And it is cold at night now, though we only had one snow so far. Also, I just know they are hiding something. I see packages arrive but instead of opening them, dad takes it and hurries away to the room with the closed door. That must mean it’s mine, right?

It has been real quiet around here. Kaity used to come over with her giant dog. Titan is REALLY big. I like to play too, but … well … Titan’s paws are the size of my head. When he gets frisky — he’s just a puppy so he jumps around a lot — I have to go hide in the crate. Once he sat on me and I wasn’t sure I’d be able to get up.
But now, no one comes over. I think a lot of people are sick and everyone is trying hard to stay unsick. So it’s just me and my three hoomans. I guess I’m lucky because I get to watch the squirrels. I get so excited when the squirrels are back on the deck, eating. I bark and bark and bark and they just keep eating. If mom and dad would just let me OUT, I’d show them the meaning of my bark!  We always have squirrels on the deck. I think that makes me lucky, but I’d be luckier if they would let me outside to get a squirrel of my own. Just to play with.

I can’t tell you how very much I want my very own squirrel. I’ll be gentle, really I will. I’m a good boy. Mom tells me that a lot. She told me I’m a good boy when I moved over to lay on top of dad’s legs. Dad doesn’t tell me I’m a good boy when I do that, but mom does and she always tells me the truth, so that must mean it’s okay, right?
I don’t think I understand Christmas. Except the two legses put up a tree and I’m not allowed to touch it. I mean, how unfair can you get? You put a TREE in the LIVING ROOM and I’m not allowed to play with it? That’s mean! And about this diet thing. They think I’m getting pudgy. I think I’m perfect. I must be because mom’s always taking my picture. I must be just fine, right? 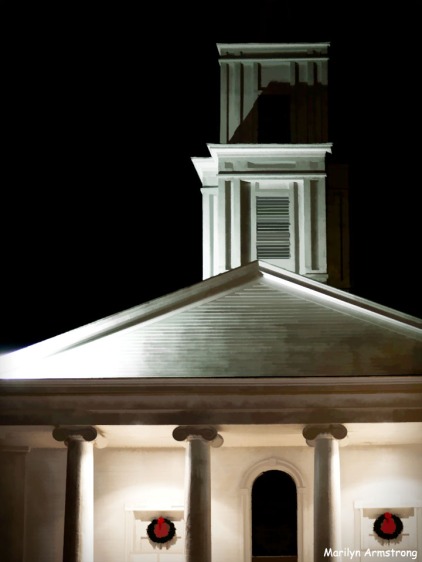 Merry Kissmas from all of us here in quarantine in New England, which is just like Old England, but newer. I wish I was over there and I could play with Ani. She’s not so huge, so it wouldn’t be quite as scary as playing with Titan!
Love,
El Duque “The Duke” 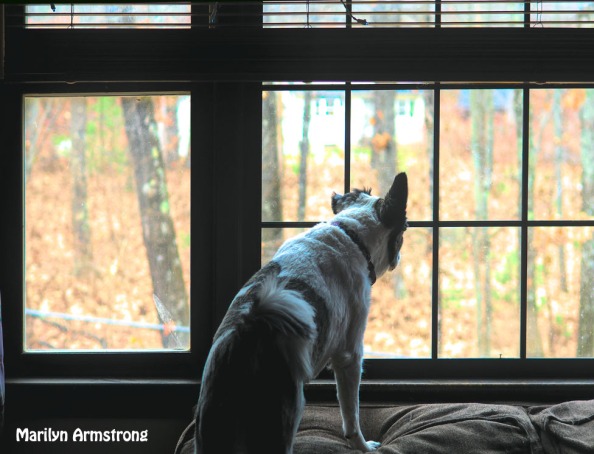 About the Duke’s Hooman

Marilyn Armstrong is a writer, blogger and photographer. She started writing as soon as she could form letters and has never heard a single good reason why she should stop. Marilyn and her husband Garry, as well their son, and The Duke, live in a setting of rare natural beauty and gigantic rocks in rural Massachusetts.

Marilyn blogs at Serendipity where she offers “memories via anecdotes, observations, occasional fiction, and photographs.”

Fighting the of demons of an abusive childhood and having given up on traditional paths to personal salvation, Maggie decides to find her own path … by building a teepee in her back yard. It’s a peculiar route, but her goal is simple: offload the cargo of her past and move into a future, sans luggage. Armed with a draw knife and a sense of humor, she peels poles and paints canvas until winter passes and she is free.