I have my friend from Spain over today. We haven’t actually met, but then, she lives a long way away and although the two-legses usually get to gallivant all over the place, they don’t seem to like it if we wander off on our own…

But, this year, even the two-legses have been kept on a short leash, so we’ve had them at home a lot more, which is good for us, even if they’ve not been too happy about it.

They do seem to be getting a bit peaky though. I’m sure mine is starting with kennel cough from not getting out enough. And she is definitely in need of more exercise… I think maybe we should all just ask you for an end to all this staying at home malarkey…

Mind you, I have to wonder about you, Santa. You get out and about plenty… a whole world in a night is a fair amount of exercise… so how come you are still cuddly? I reckon it must be the mince pies and cookies… 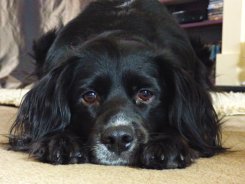 I won’t forget to leave ours out for you.

If you would like to join the fun and be part of my Advent Calendar, just send me your Christmas stories, poems and memories… or even share your letters to Santa Paws.

I’d love to hear from anyone with fur or feathers, four-legs or even two!

(Email my two-legs at findme@scvincent.com).

Wow! I can´t believe it´s been a whole year since Ani´s last Advent Calendar. And what a year it´s been. My human parents have been moaning about something called a pandemic and a lockdown they didn´t like, but I´ve had a great year.

Humans couldn´t travel and for a while they couldn´t go far from their home at all. Like that´s a bad thing? Mom couldn´t go back to Canada to see her human family. She was bummed out about that but it meant I got to have her here with me in Spain all year.

They were allowed to walk me though, because even the government knows dogs are special and need walks. So I got four walks a day! It was great.

We all stayed in our house and yard the rest of the time. I was never left alone. I missed the car rides and the beach but loved all the attention. I got loads of cuddles and snacks. Mom did a lot of baking and she always shares. I just don´t understand why they were so upset. I thought it was the best year ever!

Wishing Ani and everyone a very Merry Christmas and a super 2021.

About the (real) author

Dot is a 5-year-old Bodeguero who was rescued by two people who needed rescuing themselves. She lives with Darlene Foster, who writes children´s books when she isn´t feeding, walking or playing with Dot. You can learn more about Darlene and her books on her website, or through the links below. 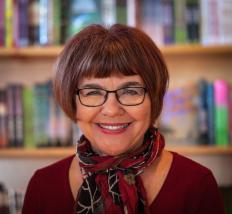 Brought up on a ranch in southern Alberta, Darlene Foster dreamt of writing, travelling the world and meeting interesting people. She also believes everyone is capable of making their dreams come true. It’s no surprise that she’s now an award-winning author of children’s adventure books who divides her time between the west coast of Canada and Orihuela Costa, in Spain.

Click the titles or images to go to Amazon

Amanda in Holland: Missing in Action

Alongside her best friend Leah, Amanda is in Holland to see the all the sights: tulips, canals, Anne Frank House, windmills, and even a wooden shoe factory. She is also keen to find out what happened to her great uncle, who never returned from World War II. What she doesn’t expect is to find and fall in love with an abandoned puppy named Joey. While trying to find a home for him, she meets Jan, a Dutch boy who offers to help, a suspicious gardener, a strange woman on a bicycle, and an overprotective goose named Gerald. Follow intrepid traveler Amanda around Holland as she encounters danger and intrigue while trying to solve another mystery in a foreign country.

Amanda in New Mexico – Ghosts in the Wind

Amanda Ross is on a school trip to Taos, New Mexico with several of her fellow creative students. Join Amanda, Cleo and their funny friend, Caleb, as they visit an ancient and beautiful landscape where a traditional hacienda, an ancient pueblo, and a haunted and spooky hotel all hold secrets to a wild and violent past. Does Cleo really see ghosts? Can Amanda escape the eerie wind that follows her everywhere? Perhaps the Day of the Dead will reveal the mysteries of Taos in this latest adventure of Amanda’s travels.

Amanda Jane Ross is certainly becoming a world traveller; she’s now in sunny Spain on vacation with her friend Leah. While there, she encounters a mysterious young girl who looks eerily like the girl in a famous painting she saw in a Madrid museum. Even weirder, the girl keeps showing up wherever Amanda finds herself – Madrid, the remote mountains of rural Spain, the beaches on the Mediterranean Sea, a lively fiesta and the busy streets of Barcelona. Amanda wants to help this sweet, young girl and her beloved pony escape the clutches of a mean horse-dealer. Come with Amanda on her next adventure as she attempts to unravel the mystery behind the Girl in the Painting while she treks across Spain – always one step ahead of danger!

Amanda is delighted to show Leah around Alberta during her visit from England. They take in the Calgary Stampede, go on a cattle drive, visit Head-Smashed-In Buffalo Jump, spend time with the dinosaurs at the Royal Tyrrell Museum and explore the crazy Hoodoos. When Amanda finds a stone with a unique mark on it, she doesn’t think it’s important until everyone seems to want it – including a very ornery cowboy. Is this stone worth ruining Leah’s holiday and placing them both in danger? Spend time with Amanda as she explores her own country while attempting to decipher the mysterious writing on the stone and keep it from those determined to take it from her.

Amanda on the Danube

Twelve year old Amanda Ross finds herself on an elegant riverboat with her bestie, Leah, cruising down the beautiful Danube, passing medieval castles, luscious green valleys and charming villages. When she is entrusted with a valuable violin by a young, homeless musician during a stop in Germany, a mean boy immediately attempts to take it from her. Back on their cruise, Amanda struggles to keep the precious violin safe for the poor prodigy. Along the way, she encounters a mysterious monk, a Santa Claus look-alike, and the same nasty boy.  Follow Amanda down the Danube, through Germany, Austria and Hungary, as she enjoys the enchanting sounds of music everywhere she goes. She remains on the lookout though, wondering just who she can trust. 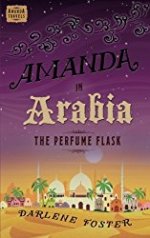 Amanda Ross is an average twelve year old Canadian girl. So what is she doing thousands of kilometres from home in the United Arab Emirates? It’s her own fault really, she wished for adventure and travel when she blew out those candles on her last birthday cake. Little did she know that a whole different world awaited her on the other side of the globe, one full of intrigue, mystery and folklore. A world with a beautiful princess, a dangerous desert and wonderful friends. Join Amanda on her first adventure as she discovers the secrets behind The Perfume Flask.

Amanda Ross is visiting England and taking in all the sights. She gets lost in the maze at Hampton Court, does some shopping at Harrods, meets the ravens in the Tower of London, explores Windsor Castle, and rides the London Eye. When she discovers a vintage book is missing from a collection, she is determined to find out who stole it. Amanda befriends a pair of tough teenagers from the streets of London, an elderly bookshop owner, and a big, friendly, clever, Maine Coon cat named Rupert. Follow Amanda through cobblestone streets, medieval castles, and underground tunnels in her quest to find the missing novel!