Yay! We are finally counting down to Christmas! It seems to have taken ages to come around this year! But it hasn’t been a great year for anyone, two-legses or four. I mean, there is this bug thing going round and I know it is worrying people and stopping them from meeting and hugging… and that is never good! Even flea treatments don’t stop me getting hugged, so it must be a really big bug… She tells me that you don’t have to worry about it though and that the reindeer are safe from it… so that’s one bit of good news!

There is othernews, though, not so good. They’ve dug up my fields to plant a high speed train line across them… which means I can’t walk where I usually go any more. All my lovely green has gone… And to make matters worse, my two-legs is broken and getting her out for a walk is not easy any more. She says it is because I get too excited… but what’s a girl to do when outside beckons? She gets excited too when they get to go out to play, so I know she understands!

So, there may have been a bit of comfort eating going on. Although, so far, I haven’t gone quite as far as Lucky… well… not this year. Yet.  After the last time I pinched the turkey… and the ham… and the salmon… I don’t fancy having to diet at Christmas… or spend it in the doghouse!

Looking forward to introducing you to some new friends and sharing time with older ones… we have lost to tell you through this Advent season, Santa!

And I am hoping that even more friends will send me their Christmas stories, poems and memories… or even share their letters to Santa Paws. (Email my two-legs at findme@scvincent.com).

P. S. If anyone is looking for a stocking filler…

Available in Paperback and for Kindle via Amazon 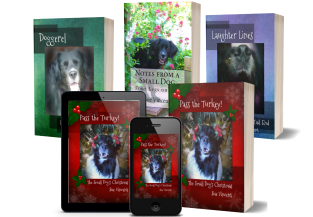 and say Happy Birthday to their two-legs, Cathy Cade!

My birthday is 1st December. We would put up our Christmas tree then when the children were small – always a real one that smelled Christmas-y. By the New Year’s Eve party, it was little more than twigs supporting baubles, lights and chocolate Santas. These had to be hung near the top, out of reach of whatever of dogs we had then.

There were always dogs. There was the Christmas morning I came downstairs to find our adopted whippet, Lucky, had brought down the dressed turkey from its high perch. Lucky’s liver was failing and her appetite was insatiable; the turkey was half-eaten. The other dogs avoided her, as if to distance themselves from the crime, as she lay on the floor like an overstuffed haggis and feebly thumped her tail at me. The children were in their teens by then and Christmas dinners had shifted to late afternoon (since breakfast lasted all morning). Younger son had defrosted too many turkey crowns for his pub’s Christmas dinners. He went off to work with a leg of lamb from my freezer to exchange for turkey for our Christmas dinner for fourteen. (Two families and Gran.)

Through December there would be a growing mound of parcels under the Tree. My second husband came with a West Highland terrier who believed any parcel in gift-wrap must be for her. The first year, she unwrapped them all, but by then our children had their own homes and Christmas customs could be flexible.

This summer, our old Staffie died; Pickle would have been sixteen if she’d made it through lockdown. Young Smidgeon missed her, in spite of having the mastiff next door to play with, so we found her a companion. This will be Ruff’s first Christmas and Smidgeon’s second.

Smidgeon spent last Christmas with the other family dogs, being overfed by the grandchildren. This year… who knows?

Following a career in libraries Cathy began writing in retirement. Her writing has been published in ‘Scribble’, ‘Best of British’, ‘Flash Fiction Magazine’, ‘Tales From the Forest’, and ‘To Hull and Back Short Story Anthology 2018’. Her stories and rhymes also appear in the Whittlesey Wordsmiths’ anthologies ‘Where the Wild Winds Blow’ and ‘A Following Wind’ (also available from Amazon).
A novella, ‘The Pond People’, has been serialised on her blog at cathy-cade.com, where you will also find occasional short stories, flash fiction and verse.
Cathy lives with her husband and dogs, mostly in the Cambridgeshire Fens and sometimes in the shadow of London’s Epping Forest.
Look out for a rewrite of ‘The Pond People’ coming soon. ‘The Mirlings’ will be available in ebook and paperback.

Click links to buy on Smashwords, Amazon UK and Amazon.com 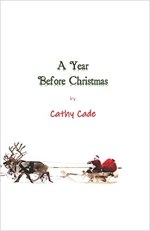 A Year Before Christmas

Emmie the Elf works hard, running errands and sweeping out reindeer stalls, but Santa’s newest helper still finds herself grounded on the biggest night of the year. Can Emmie get airborne in time for next Christmas Eve?
‘A lovely story’, Amazon review. ‘Would make a great stocking-stuffer gift,’ John Spiers.

Euphemia Ffinch, godmother to Lucinda Eleanor, has been travelling since she retired as nanny to the Regalian royal family.
Buttons the dog has lived in the basement with Cindy since his master died, while her stepmother and stepsisters live upstairs and treat her as a servant.
Prince Alfred of Regalia is dreading his birthday ball; his stutter gets worse in company and the daughters of the nobility look down on him. They are all taller than he is. He’d rather invite the girl he met online.
Euphemia learns that Cindy’s father has died. Her intuition tells her she is needed back in Regalia, but someone is trying to stop her. 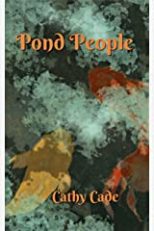 Mirlings live in the garden fishpond.When Molly meets newcomer Flash, their dislike is mutual. But it becomes difficult to avoid each other after they and Molly’s friends are netted with goldfish destined for an indoor tank.Can the mirlings stay hidden from the humans while surrounded by glass?

Will river-born Grandad end his days in a fish-tank? Will Flash’s recklessness endanger them all? Will the humans ever master fish-tank maintenance?

Witch Way: and Other Ambiguous Stories

Sixteen stories, some of which have been placed or shortlisted in competitions.

Add a flash or two and some verses, and you get a motley collection of characters who aren’t all they seem – or are they? You decide.

Meet mirlings and brownies, a citizen of Pompeii, an unsettled soul, a misguided confidante,an unlikely Samaritan, a trainee mortician, and a witch… or not.

“A little gem of a collection”, “had me on the edge of my seat … Definitely worth a read.” Amazon reviews.

Meet mirlings and brownies, a citizen of Pompeii, an unsettled soul, a misguided confidante, an unlikely Samaritan, a trainee mortician, and a witch…
or not.