Parking the car up a bumpy lane, we got out and walked along the Ridgeway for a while. She said she was saving the best till last… and I would have been happy with the little wood she let me walk her through. I like woods. You never know what you might find. What we found was a steep bank and a deep ditch… and I should prob’ly apologise for forgetting she was on the other end of the leash when I bounded down and across it… She got herself up onto her feet again and I was pretty glad to see she wasn’t broken and was still laughing. It wasn’t far then before we reached Wayland’s Smithy.

They had been hoping to have the place to themselves, but there were loads of two-legses… big ones and tiny ones… and even another dog! Thankfully, though, they didn’t stay long. Most people don’t, she says. And then we could explore properly. 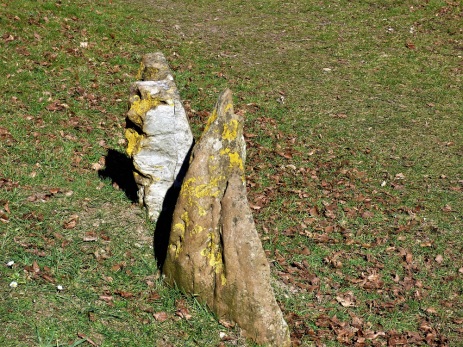 She doesn’t like getting lots of two-legses in her pictures of these old places, but you need to see just how big this thing is! Me, I’m the little black dot under the first big tree on the right… She said the mound covered a burial site and was a hundred and eighty five feet long… and had been around for a very long time.

About five and a half thousand years ago, she said, the people here had built a stone floor and a wooden house for the dead. One person was buried in there and then the bones of another fourteen people were buried with them. This house was covered in earth, then about a hundred years later, they built the new mound over it, enclosing it in a kerb of small standing stones. At the front of this new mound, there are chambers and a passageway guarded by huge standing stones. At least seven adults and one child were buried in the chambers… probably just the bones. Then she said something really worrying… She said we had to find Wayland and his consort… but that we could only see them if we were dead! I mean, I hadn’t pulled her in the ditch on purpose… 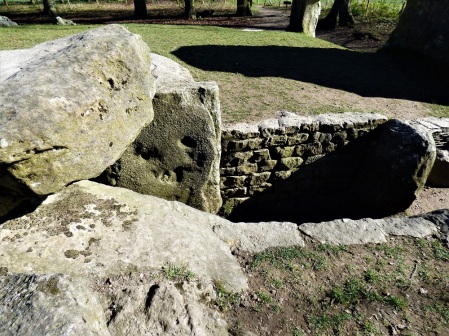 I was glad she explained a bit better! The legend is that you have to leave silver for Wayland and he will shoe your horse. Maybe, she said, that story wasn’t what it seemed… maybe by offering something of yourself, the Smith would help you continue your own inner journey. But we had to find him first. ‘Pparently, the mound would once have been a lot taller, and the backs of the stones would have been piled with earth, ‘visible’ only to the dead buried there and the seers who came to commune with the ancestors. When I had a look, I could see what she meant. The fronts of the stones were not all that interesting, but the backs were alive with faces, creatures and strange forms. And I could only see half their height from the back…

I had to go and look inside… though it isn’t about looking, at least, not with eyes. You can see stuff anywhere… even just pictures will tell you what things look like. You have to look with your other senses and listen with your heart. Then you start to understand what it is you are seeing. You touch the Long Memory… dogs understand, but a lot of two-legses don’t seem to remember. And that’s okay, as long as some do. So I went in quietly to pay my respects, then we all settled down to listen to the song of the stones. 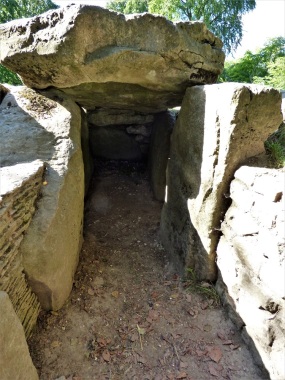 And then, it was time to leave. I was a bit tired by then, but it had been a wonderful adventure! They took me home and then went to see my boy for a while before he had to go to the big two-legs vet. I was too tired even to eat for a while so I snuggled down on the sofa… until she brought her special blanket in from the car for washing. Then I snuggled down on that instead. She just shook her head and said, “Oh, Ani….” and smiled. I think she was tired too. It was a good day.

(Click the highlighted links to read more about this site)

38 thoughts on “IndieAni Bones and the dragon’s lair III”