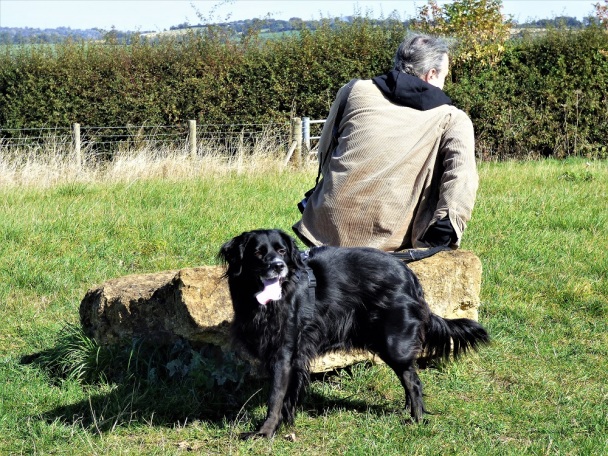 “In you go, girlie,” she says, holding the car door open. “We’re going on another adventure!” Well, it was a while ago now, but I remember it as clear as day. She put my seat belt on and told me to settle down as it was a long drive. No chance of that! Normally, when I go in the car, it means I am going to see my friends but we were going the wrong way, so adventures, here I come! But we were driving for ages… though she said it wasn’t all that far. I admit, I got a bit excited. “Oho,” says the ball-guy. “Two of them squeaking now…” Apparently, she squeaks when she gets excited too. Especially when there are stones. And, when we finally got there… there were lots of stones. I couldn’t wait to get out! 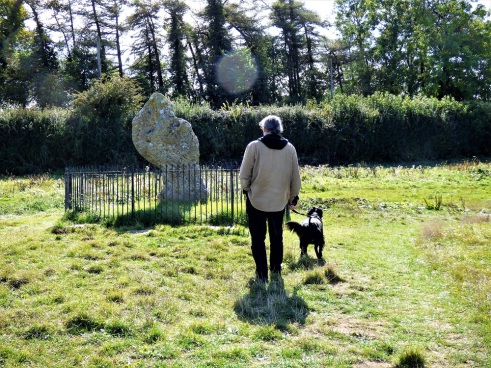 “Rollright,” she told me. Now, I know a bit about Rollright, ‘cause the ball-guy had been reading a book called ‘The Old Sod,’ which I thought was about her, but he said not. It is by Alan Richardson, and ‘pparently, it’s about William Gray, and he’d had some strange and wonderful visions at the stone circle. I remember her telling me that she did too, so I’d found out a bit about the place. 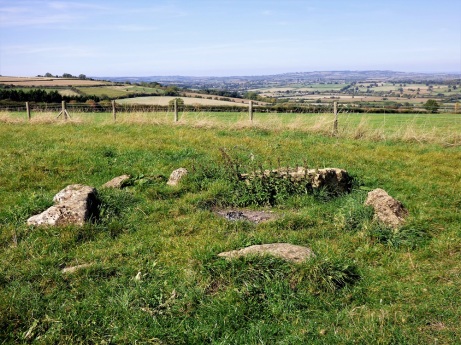 First, we went to look out over the village of Long Compton, where a witch told a king that if he took seven long strides and could see the village, he would be King of England. The rise in the land stopped him and he failed the test. He was turned to stone and became the King Stone, while some of his men became the Whispering Knights. 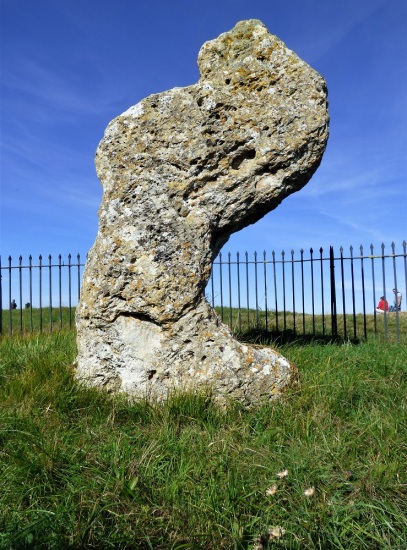 Well, that’s a good story, and no doubt those two would be talking about ‘seven league boots’ again, but the King Stone is much younger than the rest of the site. It has only been standing there for about three and a half thousand years, but the Whispering Knights and the circle are much older than that! I had a look at the barrow that’s there too and that goes back about four thousand years. There are a lot of ancient burials and cremations around the stones, including those of children, but one chamber in the cairn has never been excavated… so who knows what still lies within? They wouldn’t let me dog though to find out… 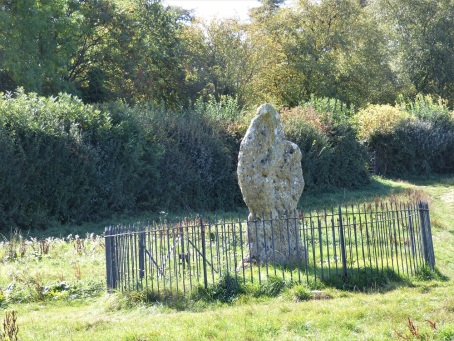 She keeps telling me that any bones I find on adventures are not to be chewed. As if I was thinking about bones! They had brought a bowl and plenty of water for me and treats and ham and stuff, but I was way too excited to eat! I don’t often get to go on these long adventures and I wanted to make the most of it. 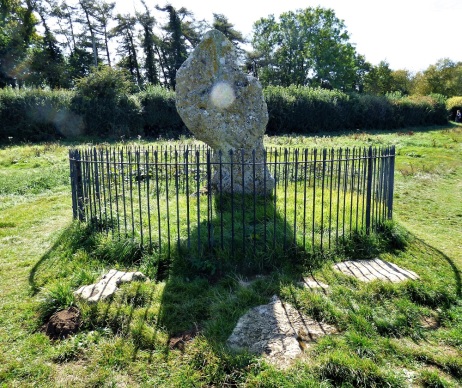 So, we saw the King Stone and I paid my respects. I also met a Labrador… and I did not dematerialise out of my harness to go speak to him, whatever she may say. I just have a Houdini streak and she said there were too many dogs and people to let me off the leash. Well… what did she expect me to do? 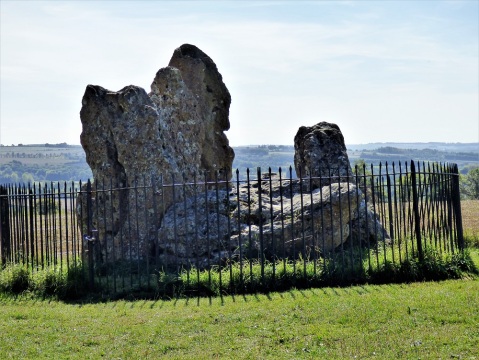 Then we walked down to the Whispering Knights. The stones lean together like people bending to hear each other, but they are all that remains of a dolmen, a burial chamber where a huge capstone is balanced on top of upright stones. The dolmen is nearly six thousand years old and the oldest part of the site. 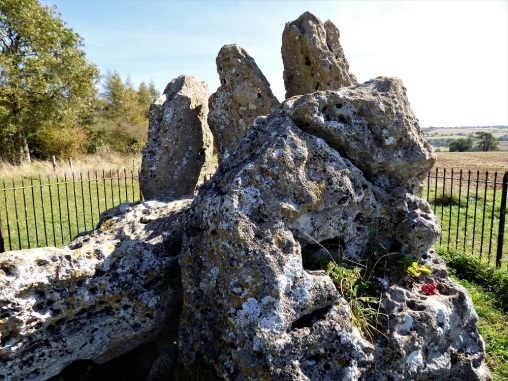 From here you can see the stone circle that most people come to see and that was our last stop. The circle is also called the King’s Men and is supposed to be the army of the king who was turned to stone. They still get together though, some nights, and wander down to Long Compton to drink, or so the stories say. 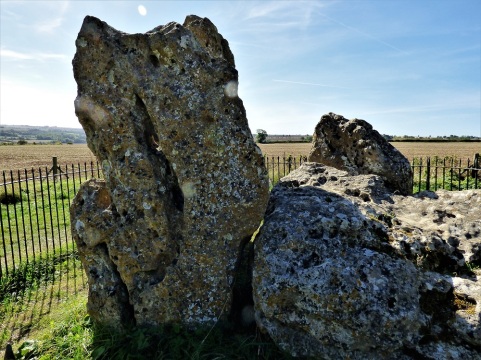 The stones are really interesting… full of shapes and forms, and full of holes. They wouldn’t let me go inside, though. ‘No dogs allowed in the circle’, they said… but it was okay for two-legses to climb on the stones, even though they have been there for four and a half thousand years. My two-legses were not at all happy about that. 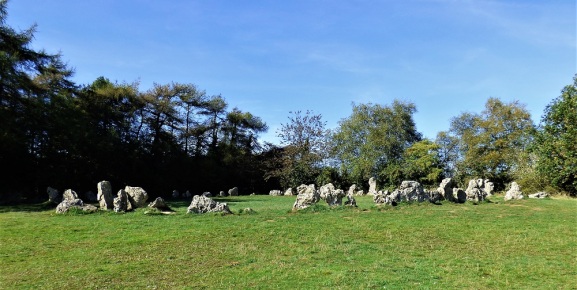 So, they walked me around the outside of the stones, so I could feel them for myself. I do love these places! We dogs have the Long Remembering of our kind, passed from dam to pup. Maybe these old stones hold the memory of your kind, in case you forget who you are. 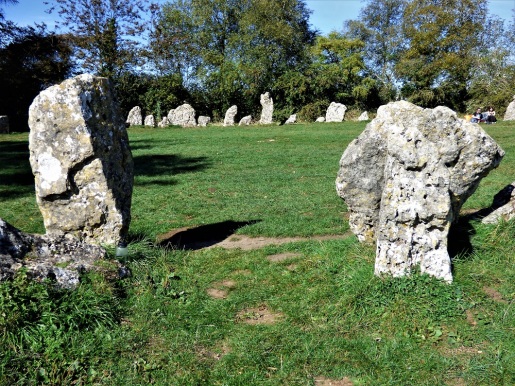 There was one last thing to see… a sculpture of the Three Fairies, made from woven willow, ivy, lime and hazel. She says it was made by Adam and David Gosling, and inspired by a painting by William Blake. The sculpture stands here because the fairies come out of the hill below the King Stone at night, to dance amongst the stones. I bet they would have let me in… 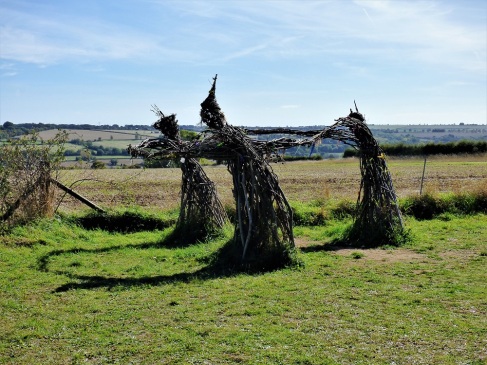 Then they took me back to the car. I didn’t really want to go home as I was loving my adventure!

“Don’t worry, girlie,” she says. “The adventure is not over yet.” 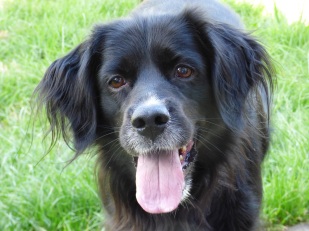 Well, I perked up at that and got in the car, good as gold. “We’re taking you somewhere else now…” And ‘pparently, it was somewhere even they had never been!

28 thoughts on “IndieAni Bones, all the King’s Men and the Fairies”