We were not far from the Oxfordshire village of Stanton Harcourt. They had stopped the car and we had set off walking through this huge landfill and waste site, with loads of good smells. Frankly, I’d have been happy with that for a day out! But they seemed to be going somewhere…

It had taken ages to get there too, and I may have had a few complaints about my ‘singing’ and asking ‘are we there yet?’ But, between questions, I had listened to what they were saying. We were going to a stone circle. It seemed they had their doubts about what we were going to find though.

It was the word ‘reconstructed’ that was causing them to worry. They explained that where ancient sites are concerned, that can mean anything from standing up a fallen stone to what they called ‘the complete ruination of the spirit of the place by overzealous and underinformed developers’. And anyway, they said, it probably wasn’t going to be much of a stone circle… it is not exactly well-known. They expected little… I was just happy to be on an adventure… and we could not have been more wrong if we’d tried.

Emerging from the tunnel of leafy shade, we were confronted by a huge open space, enclosed by the almost-circular banks and ditches, with entrances almost due east and west. They told me that the earth banks like that are called a henge… and sometimes they have stones inside. Within this henge, an almost-complete stone circle left their mouths dangling open. With the grasses and plants, it was as if, somehow, the tree-lined tunnel had been a wormhole that had led us back through time. Dogs have no problem with that, but two-legses seem to get a bit wobbly when that happens.

As usual, they hadn’t done much research beforehand. Just a bit of history and a few legends. The site, which they said was one of the seven largest circles in mainland Britain, seemed too big to see except in bits. She said it is about four hundred feet in diameter… I just thought it was a brilliant place for a proper adventure!

She told me that the site goes back five thousand years to the Neolithic period. There were originally thirty-six standing stones. Now there are only twenty-eight in the circle plus the other one that is set at an angle, like the gnomon on a sundial, just outside the southern quarter. Within the circle, she said there had once been wooden posts, like the ones at Woodhenge, and I found what looked like a burial cyst where I had a good sniff… until they broke out my drinking water.

She told me a bit about its history too. The site was damaged by ploughing in Roman and medieval times, she said, so that when John Aubrey visited the Quoits in the seventeenth century, the damage was already done. Even so, he wrote in his Monumenta Brittanica, that the “east stone is nine foot high: and as much broad: half a yard thick. The west stone is eight foot high and about six foot broad, half a yard thick.” 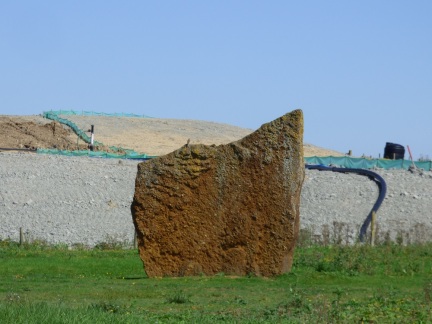 During WWII, the site was almost wiped out by runways and then gravel extraction completed its ruin. Thankfully, she said, excellent surveys and archaeological work had been done and it looks as if the entire area is littered with the remains of ancient burial mounds and what she called a cursus… a connecting processional route.

They were well impressed by the henge… the circular banks and ditches… which would have been visible from the Ridgeway, the five-thousand-year-old trackway over the hills. The henge has been partially excavated and reinstated, so you can see what it would have looked like… but only as it would have been nearly three thousand years after its construction. The banks are nowhere near as high as they were to start with and the ditches are only half as deep as they would have been. This, she said, is to preserve the archaeology that still lies buried beneath the grass and earth. The rabbits, I noticed, take no such care and are busily excavating buried treasures.

Almost straight away, I found a bone. It was big enough to be human, light enough to have been there a very long time and looked like part of a large joint. Both human and animal bones from the time of its digging have been found in the ditch, she says, and, although she said my bit was probably just a lump of sheep or something, she took it off me anyway, which I thought was a bit mean. Before she put it back in place, she went all funny, though, holding it in her hand, as if it was taking her back to another time, long, long ago, and the people who first knew this place as sacred.

There were other ‘artefacts’ too… which she said were just as dodgy, but equally important. Pieces of flint, sharp enough to cut, were all over the ditch where the rabbits had been digging. Even though the best of them was probably just a bit of random gravel, she said, you could see and feel in its edges how their earliest ancestors discovered the very first tools of stone.

One flake of flint fit comfortably between her thumb and fingers as if it had been shaped to do so and she said that its sharp edges would have been perfect for scraping hides. One curved edge looked as if it had been worked, she said, though I thought it was probably an accident of nature. It was really sharp and, like my teeth, the perfect size and shape for stripping meat from ribs. I found rib bones too. But every time I found bones they called me away… 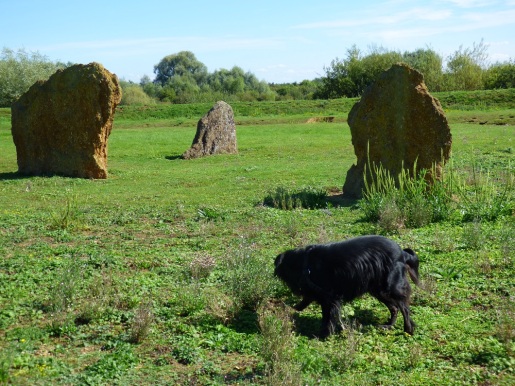 They were impressed by how the circle had been rebuilt, though, between 2002 and 2008. The original stones that were on-site, or found during excavation, have been put back in their sockets. The missing stones have been replaced, in their correct positions, with stones of similar appearance and composition. They said that whoever was responsible for choosing them either had a natural sense of ‘rightness’, an extensive knowledge of other stone circles or they were guided in their choice. I don’t know about that, but to me, the circle just feels alive.

Apart from the newness that weathering will soften, they said the stones could have been original. Looking at individual stones, they were going round naming the circles in which they have seen almost identical shapes… and almost all the stones have the half-formed faces they have come to expect.

In spite of the heat and the fact that I had already drunk all my water and had started on theirs, we were in no hurry to leave. Reconstructed or not, they said that this may well be the best circle they have seen for getting a true impression of the size, scale and ‘feel’ of these ancient and sacred places. Coming out of the trees to find it laid out in front of them seemed to be a good ‘reveal’, ’cause they had both been squeaking!

As we sat in the circle, they told me some good stories about how it was made, though they said that they obviously date from the Christian era. Legend says that the Devil was playing quoits on a Sunday and got into trouble with God for playing games on the Sabbath. The Devil threw his toys all over in a temper and made the monument. Another version says that the Devil challenged a beggar to a game of quoits on Wytham Hill… with the stake being the beggar’s soul. The Devil won when he threw the stones of the Quoit.

Yet another old story that they told me reinforces the need to treat these ancient places and their stones with respect. Farmers took one of the stones to build a bridge across a stream, the Black Ditch. No matter what they tried, though, the stone kept slipping and the bridge would not stand… so it was returned to the circle.

They told me that we are lucky to have this stone circle. Over the years, through necessity, industry, neglect or disrespect, it has suffered more than most. But, in a few years time, when the sharp edges of the stones have softened, the bare earth is once again green and the young trees have matured, they believe that it will be a jewel once more and far better known than it is today. For now, though, although it is still a bit of a rough diamond, it is once again a place of peace and power… and a place to which I hope we will return.